One of the most critical elements of an organization’s security posture in AWS, is the configuration of security groups. In some of my architectural reviews, I often see rules that are confusing, overly-permissive and without any clear business justification for the access allowed. Basically, the result is a big, steaming pile of security turds.
While I understand many shops don’t have dedicated network or infrastructure engineers to help configure their VPCs, AWS has created some excellent documentation to make it a bit easier to deploy services there. You can and should plow through the entirety of this information. But for those with short attention spans or very little time, I’ll point out some key principles and “best practices” that you must grasp when configuring security groups.
AWS documentation, including security group templates, covering multiple use-cases:
VPC Security
Security Group Basics
Security Groups for Your Application Load Balancer
Security Scenarios with Security Group Sample Rulesets
There’s also an first-rate article on visualizing and cleaning up security groups using AWS Elastic Search with Kibana.
Security groups are more effective when layered with Network ACLs, providing an additional control to help protect your resources in the event of a misconfiguration. But there are some important differences to keep in mind according to AWS:
Additionally, the AWS Security Best Practices document, makes the following recommendations:

For those who believe the purchase of some vendor magic beans (i.e. a product) will instantly fix the problem, get ready for disappointment. You’re not going to be able to configure that tool properly for enforcement until you comprehend how security groups work and what the rules should be for your environment. 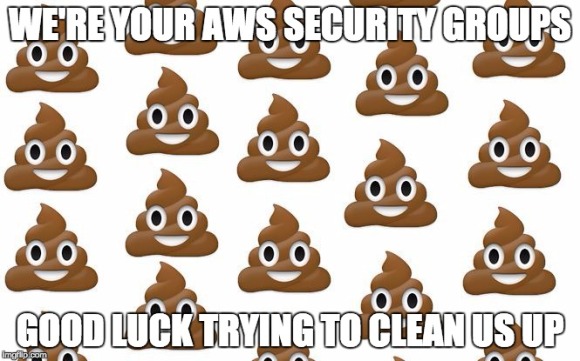 One thought on “Security Group Poop”