Mythology and the OPM Hack

Seems like every security “thought leader” on the planet has commented on the OPM hack, so I might as well join in.

Although the scope of the breach is huge, there’s nothing all that new here. In fact, it’s depressing how familiar the circumstances sound to those of us who work as defenders in an enterprise. For the moment, ignore attribution, because it’s a distraction from the essential problem. OPM was failing security kindergarten. They completely neglected the basics of rudimentary security: patching vulnerabilities, keeping operating systems upgraded, multi-factor authentication for accessing critical systems, intrusion detection.

Being on a security team in an organization often means that your cries of despair land on deaf ears. Much like a mythical figure named Cassandra. She was the daughter of the Trojan king Priam and greatly admired by Apollo, who gave her the gift of prophecy. When she spurned his affections, he converted the gift into a curse. While her predictions were still true, no one would believe them.

As a recent Washington Post story reminded us, many in security have been predicting this meltdown since the 90’s. Now that IT has become a critical component of most organizational infrastructures, there’s more at stake and we’re finally getting the attention we’ve been demanding. But it may be too late in the game, leaving worn out security pros feeling like the Trojan War’s patron saint of “I told you so’s,” Cassandra. 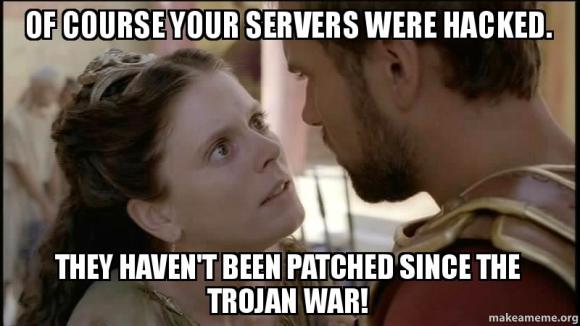