It’s been one of those weeks in information security. The kind that makes me think about raising sheep in New Zealand, because they won’t argue with me about APTs and attribution. In addition to the Java/SMTP/FTP vulnerability that has vendors scrambling, I’ve suffered through trying to explain the following:

While I could probably break each of these down and explain how the sky really isn’t falling, I think Val Smith said it best recently:

Are you able to get an accurate inventory of your network?
Can you rebuild any system, anywhere, in less than a day?
Can you push software and configuration changes, including patches, remotely?
Do you have tested backups?
Do you have enough IT/DevOps to keep your environment stable?
Do you have a tested IR plan?
Do you have proven data sources (logs, netflow, full pcap, endpoint telemetry)?

If you answered no to any of those questions, you probably shouldn’t be too worried about SHA collisions.

Fear and Loathing in Vulnerability Management

Vulnerability management – the security program that everyone loves to hate, especially those on the receiving end of a bunch of arcane reports. Increasingly, vulnerability management programs seem to be monopolizing more and more of a security team’s time, mostly because of the energy involved with scheduling, validating and interpreting scans. But does this effort actually lead anywhere besides a massive time suck and interdepartmental stalemates? I would argue that if the core of your program is built on scanning, then you’re doing it wrong.

The term vulnerability management is a misnomer, because “management” implies that you’re solving problems. Maybe in the beginning scanning and vulnerability tracking helped organizations, but now it’s just another method used by security leadership to justify their every increasing black-hole budgets. “See? I told you it was bad. Now I need more $$$$ for this super-terrific tool!”

Vulnerability management programs shouldn’t be based on scanning, they should be focused on the hard stuff: policies, standards and procedures with scans used for validation. If you’re stuck in an endless cycle of scanning, patching, more scanning and more patching; you’ve failed.

You should be focused on building processes that bake build standards and vulnerability remediation into a deployment procedure. Work with your Infrastructure team to support a DevOps model that eliminates those “pet” systems. Focus on “cattle” or immutable systems that can and should be continuously replaced when an application or operating system needs to be upgraded. Better yet, use containers. Have a glibc vulnerability? The infrastructure team should be creating new images that can be rolled out across the organization instead of trying to “patch and pray” after finally getting a maintenance window. You should have a resilient enough environment that can tolerate change; an infrastructure that’s self-healing because it’s in a state of continuous deployment.

I recognize that most organizations aren’t there, but THIS should be your goal, not scanning and patching. Because it’s a treadmill to nowhere. Or maybe you’re happy doing the same thing over and over again with no difference in the result. If so, let me find you a very large hamster wheel. 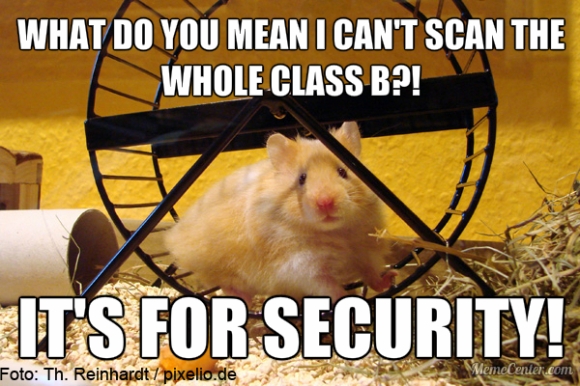 Security Threat Levels with a Side of FUD

Today the SANS Internet Storm Center raised it’s Infocon Threat Level to “yellow” due to the recently announced backdoor in Juniper devices. I wouldn’t have even known this if someone hadn’t pointed it out to me and then I felt like I was in an episode of Star Trek. I kept waiting for the ship’s computer to make an announcement so I could strap myself into my chair.

While the level names are different, the colors seem to mirror the old Homeland Security color-coded advisory system, which was eliminated in 2011 due to questions over it’s usefulness.

According to a story on CNN.com:

“The old color coded system taught Americans to be scared, not prepared,” said ranking member Rep. Bennie Thompson, D-Mississippi. “Each and every time the threat level was raised, very rarely did the public know the reason, how to proceed, or for how long to be on alert. I have raised concerns for years about the effectiveness of the system and have cited the need for improvements and transparency. Many in Congress felt the system was being used as a political scare tactic — raising and lowering the threat levels when it best suited the Bush administration.”

I have a similar experience with SANS’ Infocon and the reactions from management.

Pointy-haired Fearless Leader: OMG, the SANS Infocon is at YELLOW!!! The end of the Internet is nigh!

Much Put-Upon Security Architect: Please calm down and take a Xanax. It’s just a color.

I’d like to propose a simpler and more useful set of threat levels with recommended actions. Let’s call it the Postmodern Security Threat Action Matrix:

I know many of  you are still trying to figure out what I do for a living and that you don’t really understand my Twitter feed. Some of you are confused why I give you a hard time about your poor passwords or the fact that you forgot to use BCC in an email. Let’s just say I have your best interests at heart when I take the time to alert you about a serious security vulnerability. If I take the time to let you know about some new nastiness making the Internet a dangerous place, please update. #Include <long-winded technical explanation about SOP violation, RCE, etc…>.  I care about you and know that you don’t have the time or energy to keep up with the machinations of the black hat community. Just know that it’s bad and I’ll feel terrible if your Gmail account gets hacked. Mostly, because telling friends their accounts have been hacked feels like telling them someone ran over their dog.

For your consideration, what follows is the hypothetical discussion between a Pointy Haired Fearless Leader and a Security Analyst regarding the possibility of an organization’s large, web application having been breached. The Frankenapp in question was creatively duct-taped together around the same time that dinosaurs roamed the earth. All characters appearing in this work are fictitious. Any resemblance to real persons living or dead, is because truth is often much funnier than fiction.

SA: There’s a possibility our Super Amazing Custom Web Application has been breached.

PHFL: (Breathes into paper bag as starts to hyperventilate. In between breaths) How did this happen?!

SA: Same way it always does. A user was phished.

PHFL: But why didn’t our Extraordinarily Powerful Security Tools that cost $$$$$ stop this?!

SA: Because they don’t always work. Especially when they don’t have all the data necessary to identify malicious activity.

PHFL: But we paid $$$$$ because the vendor said it would stop APTs!

PHFL: But we have Super Powerful Web Application Firewalls!

SA: They’re still in learning mode, because the web developers won’t work with us to identify false positives. And a WAF won’t detect phished credentials. We need multi-factor authentication to prevent this.

PHFL: But MFA annoys the users. What about the network firewalls?!

SA: Our firewalls wouldn’t have caught this and our web filtering system hasn’t worked for months.

PHFL: Do we know what accounts were compromised?

SA: We don’t have enough data. We don’t really have many application logs and the ones we do have aren’t being sent to the  SOC to be correlated.

PHFL: Why wasn’t I told about this tragic and desperately horrible situation?!

SA: I’ve been telling you every week since I took the job. I even hired someone to sky-write it twice. I’m also working on an off-Broadway musical called, We’re About to be Pwned Because Our Visibility Stinks and Our Security Tools Are Broken.

PHFL: Well, this is clearly your fault.

This week’s latest stunt hacking episode seemed to cement the security community’s reputation as the industry bad boy. The Wired car hacking story demonstrated an absence of the responsible disclosure most security researchers strive to follow. While the story indicated that Miller and Valasek have been working with Chrysler for nine months and that they’re leaving out a key element of the published exploit, there’s still going to be enough left to cause some mayhem when released at Black Hat USA next month. Moreover, the story’s writer and innocent bystanders were often in harm’s way during the demonstration on a major highway in St. Louis.

The annual Black Hat conference in Vegas is an adult version of “look what I can do” for the security set, perfectly placed in the city’s carnival atmosphere. A grand spectacle where every breaker competes to get Daddy’s attention by taking apart the toaster, or car in this case. The media loves this stuff and floods outlets with paranoia-inducing stories the few weeks before and during the conference.  What’s so disturbing about these events isn’t the frailty of our technology-enabled stuff aka “Internet of Things,” but the need for a subset of people to focus on its faults. The typical rationale from many of these researchers for their theatrical, hype-infested releases during Black Hat and other security conferences, is that they can’t get any attention from manufacturers when going the path of responsible disclosure. I would argue that this behavior is more about ego than concern for the safety of consumers, because there are plenty of principled researchers, quiet heroes who slog along filing bugs with vendors, unknown and overlooked by the general public.

Most idiots can blow up a cathedral with enough C-4. But it takes a Bernini or Michelangelo with hundreds of talented, dedicated artisans, to design and build one. People who will never be remembered by tourists standing in the middle St. Peter’s, glorying in the majesty of such an achievement.

It’s probably insensitive of me to do this in a blog post, but I can’t trust myself to be alone with you anymore. The relationship started out great. Those cute kitten and puppy videos would get me through the most stressful days, when I just needed to turn off my brain off after a day of navigating the network poopfest at work. I wish we could go back and start over again, but after three patches in a week, I’m done. This just isn’t working for me anymore. Okay, I know we could still have some fun times, but I simply don’t feel safe with you anymore. So I’m going to have to end it. And to be clear, it’s not me, it’s you.

P.S. I’d just like to point out the irony of a recent Wired article, “Flash.Must.Die.” It has a Flash popup. 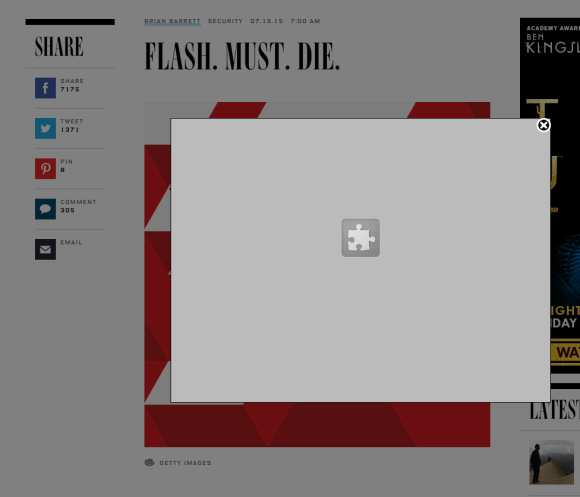